Make Irvine College of Law Your Pathway to Success

Irvine College of Law is proud of its mission to help diversify California’s legal profession by educating qualified working adults to become licensed California attorneys. To further that worthy goal, the law school seeks to admit only those who, through their college education and work experience, appear likely to succeed in its challenging J.D. degree program.

The law school’s admission standards are governed by California lawadmiss and the rules and guidelines issued by the Committee of Bar Examiners of the State Bar of California. Under such authority, Irvine College of Law may admit only those applicants who meet the minimum amount of acceptable undergraduate education and who demonstrate that they have the time and determination to study law as they meet the equally important time demands of their home and work life.

Applicants who hold a bachelor’s degree from an accredited undergraduate institution are considered the strongest candidates for admission. Irvine College of Law often admits those with a two-year associate degree from an acceptable community college, while those without a college degree will be considered and admitted if they have earned at least 60 units of acceptable college credit in academic subjects (English, History, Political Science, Economics, Mathematics, Philosophy) that teach the analytical and writing skills needed to study law successfully. Courses teaching vocational skills and most elective subjects may not be found to meet the 60-unit requirement.

The law school does not require applicants to take and report a score on the Law School Admissions Test. However, if an applicant has an LSAT score, they will be asked to provide it so that it may be considered among the applicant’s other qualifications for admission.

The law school also has a unique admissions requirement: Participation and completion of its Pre-Law Course; four, three-hour class sessions taught by a member of the faculty who covers how law is taught, including the use Socratic teaching, along with the basic elements of legal analysis and writing. The course is designed to give applicants real insight into the nature, rigor and demands of Irvine College of Law’s J.D. program, while each applicant’s participation is used as a factor by the Irvine College of Law Admissions Committee in its decision to grant or deny admission to each applicant.

Irvine College of Law admits new students twice a year, either in its Summer/Fall semester (starting in early July), or its Winter/Spring semester in early January. To be admitted, applicants must have their admissions file completed at least eight weeks before the start of either semester.

Finally, given its educational mission and focus on admitting those who appear able to succeed, the law school makes its admissions decisions by taking into consideration each applicant’s prior education, their individual work history and their life experiences and accomplishments.

Irvine College of Law current tuition charge for its J.D. program is $480 per academic unit.  To earn a J.D. degree, Irvine College of Law students must complete a minimum of 80 units, resulting in a total of tuition expense of $38,400 to complete the program and graduate with their degree.

In addition to tuition, Irvine College of Law students pay approximately $1,500 ($375 per year) in various annual fees for access to various academic resources, such as Lexis/Nexus, CALI and Adaptibar.  Other fees include enrollment fees and other administrative expenses. 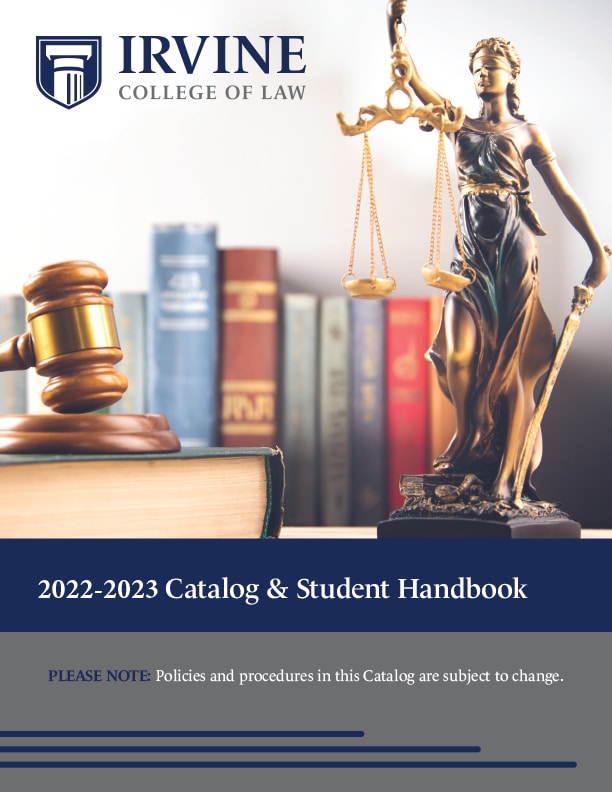 Please forward this information to your family, friends, and colleagues who may be interested in studying law. Please let us know if you have any further questions or need assistance to RSVP to the event.

Notify me about the next Information Session